Posted on January 3, 2014 by fromthethicket 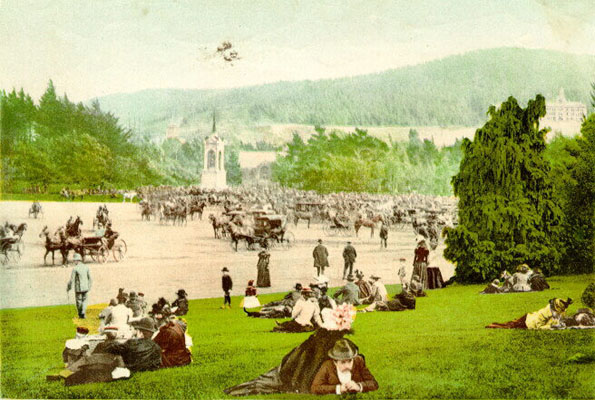 People-watching is a popular, free entertainment that has been available in Golden Gate Park since it first opened to the public in the 1870s.  Here’s one observer’s report on the show that was running on Oct. 8, 1888 (San Francisco Chronicle).

“Golden Gate Park was crowded yesterday with the gayest and best of the city’s population.   .   .   .   There is hardly a public recreation ground in the country that affords as many advantages for pleasure-seekers as the Golden Gate Park of San Francisco.  Leaving the flowers, trees, music and kaleidoscopic views of rare beauty out of the question, there are plenty of other things to occupy one’s mind and eyes.

There is the young man who has borrowed his friend’s horse and who braves the galling of a humble part of his anatomy that he may be seen, admired, and mayhap adored by the hundreds of fair women who go to the park and pine and pine and pine to adore something or somebody.  The horse on which the young man bobs like the lightsome cork that marks the nibble of the finny beauty beneath the cold waters of river or bay knows the lowest thread in the youth’s trousers does but reach a half inch below his knee;  it knows his necktie has broken loose from its patent holder and has joined the wilting collar in a struggle to get over the rider’s ears;  it knows he is being turned inside out and upside down and back and across;  it knows his arms are sticking out in a wild, unromantic and unhorsemanlike manner and that everybody shares the knowledge, but it will not “whoa there, boy, whoa there.”  It dances and prances and gets the bottoms of the rider’s trousers nearer his knees and gives those who go out to see, admire and adore something worthy of fixed attention.

Then there’s the couple who have got to do their courting in public places and heavens how practice has made them perfect in it and oblivious to the fact that they furnish amusement when the horseman has passed out of sight.  With an audacity that causes the teeth of the lawnmower to grind in agony, those spoons march (that’s the word) up and down, obtruding their love-sickness on everybody and calling attention to the state to which the courtship has progressed by the easy, natural and unconcerned way in which he keeps his arm around her waist and she puts her head on his shoulder.  In every well-regulated household there is a drawer or a case or a box for spoons.  In every park there should be a lovers’ lane or adorers’ asylum, or sweethearts’ stroll or some such thing where the billing and cooing of those goslings may not offend the married men and make cynics of us all.

One has hardly time to wipe one’s glasses in order to get the last glance at that waist-containing arm before the man with the new act gets into focus.  He gets in and stays there a long while, as if loath to tear himself away from a spot where there are so many people to look at him.  Some men wear new clothes as if they were decorations of a high and rare order.  They seem to think that their suits are the only clothes in the park and would feel mortally offended if even their best friend asked them for what tailor they were doing the dummy act.  The observer cannot help seeing how the man with the new clothes gives his vest a gentle pull, administers an affectionate pat to the lapel of his coat, or adjusts the fit of the trousers by a movement not unlike that of an ophidian when getting rid of the last few inches of yesteryear’s overcoat.  The man with the new clothes is a prominent factor in the amusement of the plain, ordinary dyspeptics who go to the park for the sole purpose of finding fault with everything and everybody.  .  . ”

People-watching in the park has surely changed over time, but some things remain constant.  Stay tuned for more reports.