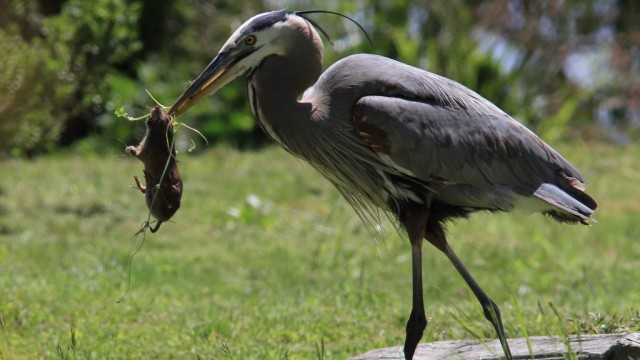 “Its a sight to behold: an elegant four-foot tall heron slowly stalking across the field above the Big Rec baseball diamonds in Golden Gate Park. Suddenly, from a motionless stance, it strikes out and nabs an unsuspecting pocket gopher, swallowing it whole. If youve seen it happen, you wont soon forget it, and if not, this is a prime time for heron sightings. Why? Because up at Stow Lake, they have nests full of hungry mouths to feed.

Great Blue Herons are solitary birds for most of the year, but when mating season arrives in the spring, they pair off and build nests close to one another. Assuming they were successful the previous year, the same pair will often mate year after year, raising chicks in saucer-shaped nests that range from 1.5 to 4 feet across. Nests used over and over like those at Stow Lake tend to be on the larger end of the size scale.

On Saturday morning, volunteers at San Francisco Nature Education had a series of spotting scopes set up just to the right of Stow Lakes boathouse, trained on Heron Island’s towering treetops. The scene was action-packed. Adult herons swooped through the air, chasing one another away from their nests, and every so often the chicks could be seen between tree branches strutting around their nests. Observers estimate the four nesting pairs produced six chicks, which hatched in early April and are now about six weeks old.  .  .  .

Herons can be seen in Golden Gate Park year-round, though individuals are thought to come and go. This year’s chicks and their parents should be visible at Stow Lake’s Heron Island until mid-late June, but if you want the benefit of San Francisco Nature Education’s naturalists and spotting scopes at your disposal, don’t miss the final “Heron Watch” program on Saturday, May 19. Founder Nancy DeStefanis first started documenting the birds’ nesting behavior at Stow Lake in 1993, and now runs a series of interpretive bird walks, field trips, and observation sessions to educate school kids and locals about birds and local ecology.”