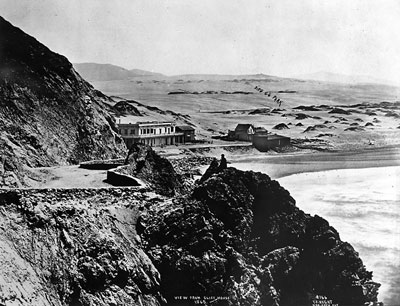 view from the cliff house to outside lands, 1865 (photo source: http://www.sfimages.com/history/GGPark.html)

In The Making of Golden Gate Park:  The Early Years, 1865 – 1906, Raymond Clary recounted some fascinating anecdotes from the early history of Golden Gate Park.  Many of them have long been forgotten.  One story that caught my eye recently was about Chicken Point, a small hill that used to exist where JFK Drive now intersects Middle Drive.  It was called Chicken Point because it was occupied by an old man who lived there in a rude shack and kept chickens and geese to eke out a livelihood.  The birds roamed freely during the day and the old man rounded them up each evening into some ramshackle pens he had constructed to protect them from coyotes.  According to Clary’s account, one evening in 1871 the old man fell while rounding up his flock and broke his leg.  He was taken to the hospital and was frantic with worry about the safety of his flock in his absence.  To ease his mind, William Hammond Hall, who was then superintendent of the nascent park, appointed one of his crew to stay in the old man’s shack and mind the chickens until he returned from the hospital.  (Clary, p. 14).

I find this story so evocative of the tentative early years of the park, when Hall and his men were struggling to establish some vegetative cover on the barren sand dunes.  It must have seemed perfectly appropriate that an old man would be living a marginal life there, raising chickens.  Perhaps it was harder to imagine, in those days, the verdant, forested landscape that we now take so much for granted!