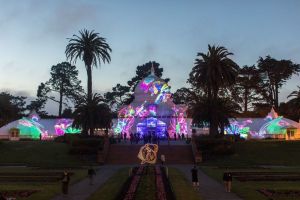 Illuminate, which was vital in giving birth to The Bay Lights in San Francisco, rallied with creative dynamo Obscura, San Francisco Parks Alliance and San Francisco Recreation and Parks to launch Illumination.

San Franciscans have never been known to hold back from artistic expression or for being valiant crusaders of civil rights for that matter. However something truly groovy emerged this month in Golden Gate Park to honor the 50th anniversary of the Summer of Love and it is turning heads near and far. Illuminate, the stellar enterprise that brought The Bay Lights to life, has been the catalyst for bringing the power of light to the beloved Conservatory of Flowers all summer long. Working closely with creative tech titans Obscura Digital, and the San Francisco Recreation and Parks, the Californian Historical Society, and the Conservatory of Flowers, the bold endeavor—wonderfully dubbed “Illumination”—is one-part celebration, one-part breathtaking, large-scale light-based public art installation. It uses gobo projectors to transform the all-white landmark with a series of vibrantly illuminated scenes inspired by the rare tropical flowers, which have become the legacy of San Francisco’s beloved flower children. Flower Power indeed.

Feel the love and read on …

The Summer of Love, for the few humans who may be oblivious to important historic moments that shaped a generation, was the social phenomenon that unfolded during the summer of 1967. Nearly 100,000 people—mostly young folks adorned in hippie fashions and whose love-inspired acts were emotionally juicy if not memorable—converged in San Francisco’s Haight-Ashbury neighborhood. The 2017 celebration began with a Summer Solstice kick-off event that attracted nearly 20,000 people—members of Jefferson Airplane, and the groups Big Brother and the Holding Company, among others, were on hand and that “All You Need Is Love” sing-a-long was a hit. And when the Conservatory was lit up, cheers erupted from the crowd.

Catch the sumptous visual showcase at dusk, continuing to run every 30 minutes beginning at the top of every hour and 30-minute mark. But things continue to blossom. On Friday, June 30, along comes Phototaxis: Free Friday Night at the Conservatory of Flowers. San Francisco Recreation and Parks has given Illuminate access to the Conservatory after-hours. The facility, which typically closes at 6 p.m., reopens a half-hour later. From 6:30-8:30 p.m., patrons who wear flowers in their hair—in the spirit of The Summer of Love, of course—will be admitted for free (“lovingly”) into the portal. (Take note, love child: space is limited.) “It’s poetic, generous, playful,” muses Ben Davis, Founder, President and CEO of Illuminate, whose mission to “rally large groups of people together to create impossible works of public art that, through awe, free humanity’s better nature,” is clearly succeeding.

In addition to Phototaxis, there’s also “B.” Check this out: Patrons are invited to another one-of-a-kind experience in the Conservatory valley tunnel, near the Conservatory on Kennedy Drive. There, at varying intervals, people will enter the tunnel where volunteers will assist them with lighting candles. Or, as Davis, notes: “lighting old flames, new flames, or eternal flames in honor of The Summer of Love.” The experiential public art work will also allow individuals to strike handmade chimes.  “The idea is that we can gather, make noises together in the tunnel that have to do with the process of ritual,” Davis explains. “The ritual of intention and love, the ritual of candle lighting, the ritual of chime-ringing, and the ritual of chanting … to really cleanse the spiritual palate and then walk out, and into the Conservatory of Flowers.”  “B” occurs every Friday night during The Summer of Love celebration.

In the meantime, illumination always happens whenever you get Davis talking about his many creative ideas. The man is an intrepid if not fierce creative midwife to the births of mesmerizing works of public art. “Illumination” emerged after Davis spent many years cycling over the Golden Gate Bridge. His route home always included a pathway through Golden Gate Park.  “For years, I’ve been amazed at the irresistible beauty of the Conservatory of Flowers, this 1879 structure, which is white-washed in defense of the sun burning the plants inside,” he says. “Ever since The Bay Lights, I have been seeing the world as a potential canvas, and this building looked like a canvas to me.”

Less than a year ago, it “hit” him.  Davis realized he was friends with some of the creatives involved in Obscura Digital, which has been producing world-class works around the globe in terms of illumination. The organization lit the Vatican, the City Opera House, The Empire State Building, and The UN building in New York City, among others.  “I realized we had this extraordinary talent right here in our own backyard, “ Davis adds. “And I have been looking for excuses to work with Phil Ginsburg, the General Manager of San Francisco Recreation and Parks.”  He called an informal meeting between talents, but the potential project really caught on just four months ago when all parties decided to “go for it.”

“We hit the equivalent of breaking the 4-minute mile in terms of getting the city’s permission,” Davis notes. “We had suddenly pulled together not just the artwork itself and the installation, but there was a concert for 20,000 people on Summer Solstice, that was generously donated. What an exquisite night.”What an exquisite idea.In an era where the inertia from media and politics is undeniably strong and continues to potentially distract humanity from, well, its humanity, it is refreshing to see Davis, Obscura Digital, the Conservatory of Flowers et al emerge as incandescent agents of change, capable of inspiring the world through the most powerful and reliable force of nature of all: Love.