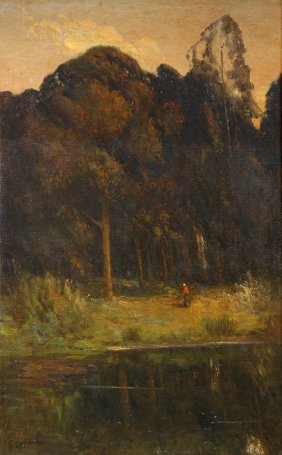 The Cadenasso Group, a grove of Eucalyptus trees on the west shore of Middle Lake in Golden Gate Park, is named in honor of  San Francisco painter Giuseppe Cadenasso (1858-1918).  Cadenasso arrived in California from Italy at the age of 9 and studied painting at the California School of Design and The Mark Hopkins Institute under Arthur Mathews (1860-1945) and Raymond Yelland (1848-1900).  He became a successful Bay Area landscape painter and a leading figure in San Francisco’s artistic community, maintaining a house and studio on Russian Hill until it was destroyed in the fire that followed the 1906 Earthquake.  After that tragic event, Cadenasso moved his studio to Oakland, where he been appointed as professor and chair of the art department at Mills College in 1902, a position he held for the rest of his life.  He was among a group of celebrated plein air painters in California in this period, who extolled the beauty of the local landscape.  Among his favorite subjects were the Eucalyptus trees and, particularly, the varied effects of light on their luminous trunks and dappled foliage.

Cadenasso was struck and killed by a car at the intersection of Powell and Post in San Francisco in 1918, as he was returning home after seeing his son off to fight in WW I.  In 1919, then mayor of San Francisco, James Rolph, requested the dedication of a grove of eucalyptus in Golden Gate Park to commemorate  Cadenasso, as he had frequently painted there. 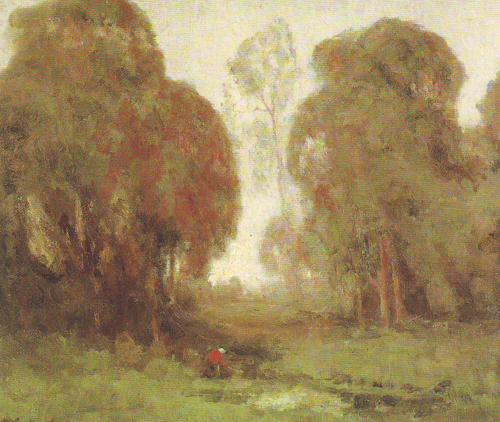