Shakespeare in the Park

Posted on February 26, 2014 by fromthethicket

Here’s a lovely article about the Shakespeare Garden in Golden Gate Park.   Reminds me that I’ve been meaning to revisit this little gem.  When the rain stops  .  .  .

“An Afternoon with the Bard in Golden Gate Park 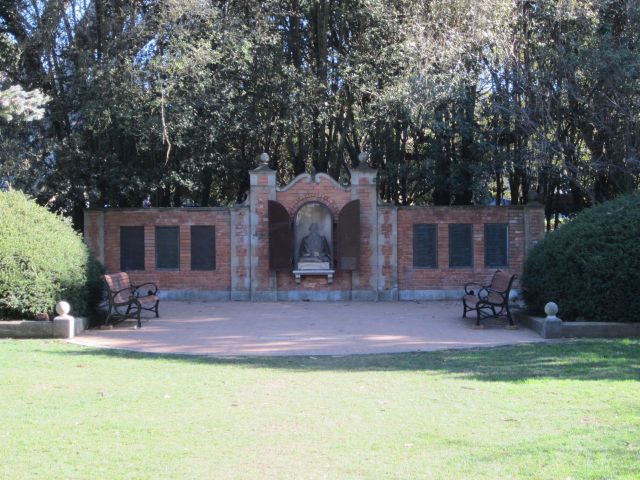 In a quiet spot, just west of the bustle of the California Academy of Sciences in Golden Gate Park, sits a garden dedicated to English literature’s crowned prince: William Shakespeare. Once you make it past the entrance gate and down the worn brick path, you are transported into an English garden filled with manicured flower beds, trimmed lawns, and people escaping the noise of the city.

Joe Chmielewski is scanning a row of bronze plaques. Each is stamped with quotes from William Shakespeare’s works. He reads one from Midsummer Night’s Dream:

I know a bank where the wild thyme blows,

Where oxlips and the nodding violet grows,

Quite over-canopied with luscious woodbine,

With sweet musk-roses and with eglantine:

There sleeps Titania sometime of the night,

Lull’d in these flowers with dances and delight.

The Garden of Shakespeare’s Flowers is an enclosed nook of Golden Gate park filled only with plants mentioned in the writings of The Bard. Chmielewski is one of the park’s gardeners and he loves the flowers here.

“Along the fence there is the Eglantine roses,” Chmielewski points out. “It’s an old tea rose, so it spreads and it puts out a very nice flower. But, then you just get this brilliant rose hip behind it.”

This garden, though special, is actually not unique.

“This is one of several Shakespeare gardens throughout the country,” Chmielewski explains, “and there are several others around the world and they’re all basically outlined the same way: a 17th century classical garden.”

Cleveland, Manhattan, Vienna, and Johannesburg all have Shakespeare Gardens. Most of them were built in the early part of the 1900s. This one opened in the Summer of 1929, and there is a reason why there are Shakespeare gardens and not Mark Twain or Hemingway gardens.

“He mentions plants really vividly and really in-depth in a lot of his works,” says Anderson. Anderson’s favorite plant in the garden is the cedar tree. It stretches tall above the flowers, presiding over the entire garden.

“It’s a great specimen and I suspect that it was one of the original plantings and it’s covered in Spanish moss,” says Anderson.

Lauren Sabadin says she comes to the garden often. Today she is lying on a blanket with an old book.

“I was actually just reading my poetry book and trying to draw some inspiration and do some writing,” Sabadin says.

The book she is reading from is actually the same age as the garden, filled with poems from the early 1900s. Sabadin reads me part of her favorite: “The Philosopher” by Edna St. Vincent Millet:

And what are you that, wanting you,

I should be kept awake

As many nights as there are days.

With weeping for your sake?

And what are you that, missing you,

As many days as crawl

I should be listening to the wind

And looking at the wall?

I know a man that’s a braver man

And twenty men as kind,

And what are you, that you should be

The one man in my mind?

“She has a crush on a philosopher,” Sabadin adds. Beyond inspiration, Sabadin says the garden offers her a refuge.

“It’s my escape from the bustle of the city streets,” Sabadin says. “I come to just enjoy the beauty and peace and quiet. I love to read and write and nap down here. Catch up on my sleep a little bit.”

As Chmielewski gets ready to leave, locks up a set of steel shutters that enclose a bust of Shakespeare himself. It is a unique replica of a famous statue from the writer’s home town in England. He is holding a quill and looking straight ahead. There is an inscription under the statue: “A gift to our city from the town of Stratford-upon-Avon and its former mayor Archibald Flower.”

Park Superintendent Eric Anderson says they normally they keep the statue locked away. Perhaps back in 1929, you could have valuable busts sitting out in the open. But not so these days.

In fact, if you look where there are suppose to be six plaques with Shakespeare quotes, today there are only four, and a couple blank spaces. Those two bronze plaques were wrenched off the wall in 2008, most likely stolen to be sold for scrap metal. No matter how tranquil it may seem here, we are still in the middle of 21st century San Francisco.”

via An Afternoon with the Bard in Golden Gate Park | KALW.

2 Responses to Shakespeare in the Park