Posted on September 22, 2011 by fromthethicket 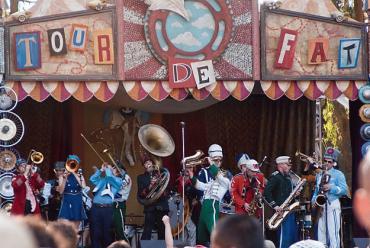 ‘September is the best time of the year in San Francisco.

The sun is shining, the cool weather is behind us and the festival season is in full bloom. For residents who ride bikes, September brings with it one of the most exciting events of the year: the Tour de Fat, on Saturday at Lindley Meadow in Golden Gate Park.

The annual free bike and beer ballyhoo, which will hit 13 cities across the country this year, is hosted by the New Belgium Brewery Co. of Fort Collins, Colo.; it’s named after its popular Fat Tire amber ale.

Now in its 12th year, the festival continues to expand on its goal to “roust a city’s inner city cyclist” by offering a full day of music, art and bicycle fun. This year, with the beer garden separated from the rest of the event, it’s an all-ages, family-friendly event.

Festivities begin with an 11 a.m. costumed ride through the park (registration starts at 10 a.m.) and continue through the afternoon with music from indie bands the Dovekins and Free Energy, as well as the renegade parade stylings of the Extra Action Marching Band. There will also be a fiery stunt bike performance and a collection of crazy, carnival-like bikes to ride.

The day culminates with one partygoer giving up his gas-guzzling car for a custom, handcrafted steel commuter bike. Complete with fenders, racks and panniers, this bike is designed to do everything your car could do – except pollute.

In keeping with the brewer’s message of green living, the festival will be powered through solar and biofuel and incorporate recycling and compost bins. Last year’s festival produced only 12 pounds of trash for 6,500 people, according to the bicycle coalition, making it one of the greenest San Francisco festivals of the year.

No matter your reason for riding – community, the environment, fun – the Tour de Fat will probably reinforce why you do it.