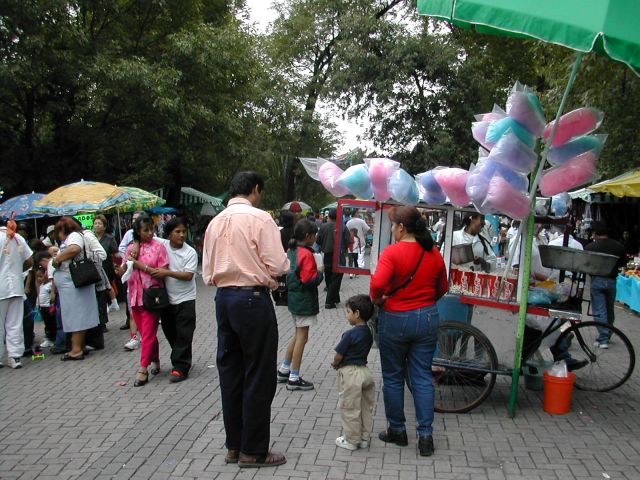 Could it be that New York City parks are poised to surpass San Francisco parks in gourmet food offerings?  The following article, from the New York Times, hints at what foodies in New York have to look forward to.  This reminds me of many happy hours I spent eating my way through Chapultepec Park in Mexico City, pictured above.  Read on  .  .  .

“Yearning to soar above its tired, rote roster of hot dogs and pretzels, the New York City Department of Parks and Recreation put out a call five months ago for the food vendors of New York ‘to propose your most inventive, exciting food idea,’ adding, ‘whatever the idea, we want to see it.’ .  .  .

The response was not overwhelming: the department received 58 applications to sell food in some 50 locations that were made available. But the invitation provoked enough interest for the department to designate vendors in eight locations who plan to field trucks and carts selling everything from kimchi fried rice and epicurean grilledcheese sandwiches to organic ice cream and ginger slushes.  .  .  .

Some of the food will be available Wednesday by the department headquarters at 64th Street and Fifth Avenue, when 15 concessionaires, new and previously approved, will assemble for a media event open to the public from 11 a.m. to 2 p.m.

The department has so far designated only these few new specialty vendors ‘because there were no bids for some locations, and because some bids just didn’t measure up,’ said Betsy Smith, the department’s assistant commissioner for revenue and marketing.

Street food has proliferated on city streets, but deployment in the parks has been slowed because applicants must wend their way through the city’s cumbersome contract-approval process requiring background checks and verification of the vendors’ financial resources.

The application ‘is very difficult, beyond the skills of many cart holders,’said Sean Basinski, director of the Street Vendor Project, a nonprofit advocacy group. ‘It’s not designed to attract immigrant street vendors. You need a Harvard M.B.A. to fill it out.’

His group believes that ‘the process should be democratized,’ he said, ‘and some of the burdensome requirements for application should be done away with.’

Ms. Smith said the department has ‘done a lot of hand-holding, trying to walk people through the process,’ and has held educational sessions for would-be concessionaires. She acknowledged, though, that the department could do more, ‘and going forward, we are going to focus on fewer locations and do more outreach for each one,’ she said. ‘We have to go out and drum up business.’

Despite the constraints of mobility, some vendors will offer a degree of complexity in their food. Li’l Purple Yam will serve its Noritaco, a sheet of nori seaweed painted with rice flour and pan-fried until it has become a crunchy taco shell. It is topped with kimchi fried rice and a salad of mountain yam, green mango, papaya, jicama and watercress.

Currently some 400 concessions, many of which sell food, bring in $42 million in revenues to the Parks Department from 5,000 properties under its jurisdiction (3,000 are parks, and 2,000 of those have names).

Hot-dog carts pay a minimum of $600 a year in low-traffic locations, but the new specialty carts will pay from $15,000 to $150,000 a year in five-year contracts (the most expensive, outside the Metropolitan Museum of Art, require $158,122). Currently there are 25 specialty carts and trucks in the parks.

The push for better food is in part a response to changing demographics and greater food sophistication. Mr. Benepe said parks are busier than ever, with more families staying in the city rather than moving to the suburbs, and immigrant groups enjoying parks that were once lightly used.

‘All these forces have come together,’ he said, ‘and when you have more visitors and families in parks, you have an increased interest in food.'”

I'm a landscape historian and professor emeritus of landscape architecture, UC Davis. I live in San Francisco.
View all posts by fromthethicket →
This entry was posted in eating, recreation and tagged food vendors in parks, golden gate park. Bookmark the permalink.