Posted on October 7, 2010 by fromthethicket

Last Sunday the park was a study in contrasts!  In the vicinity of Speedway Meadow it was such a happening place:  people elbow to elbow on JFK Drive,  picnic blankets end to end in the meadows, standing room only on the hillsides, music and marijuana in the air.  But at the music concourse an entirely different scene:  no crowds, no music, just the sound of tinkling fountains, a few people strolling, some entering the museums in twos and threes. 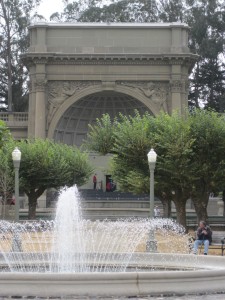 This contrast is like a time warp.  The music concourse is such a product of the nineteenth century .  .  .   originally it was the Court of Honor of the Midwinter Fair of 1894 .  .  . the Spreckels Temple of Music was dedicated in 1900 as a venue for a different kind of concert, designed for a small, decorous  audience.  Whereas  the Hardly, Strictly Bluegrass Festival owes much to the 60s and 70s, when record-breaking crowds converged on the park for musical happenings, love-ins and anti-war protests.

Today the park accommodates these very different scenes simultaneously, without one impacting the other.   But it’s worth noting that is was actually designed for the former, while it merely accommodates the latter.  This fact was brought home to me on Sunday as I walked along JFK drive and noticed the impromptu moorings of bicycles in the trees and roots along the way! 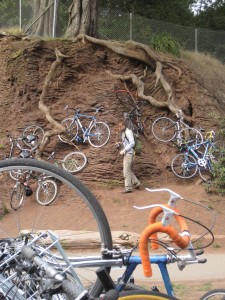 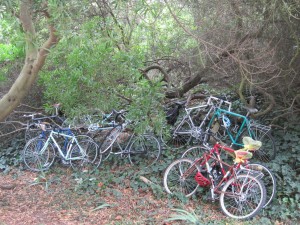 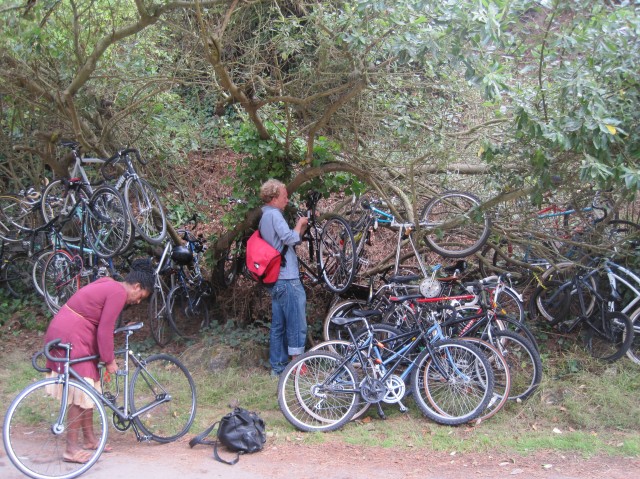 I'm a landscape historian and professor emeritus of landscape architecture, UC Davis. I live in San Francisco.
View all posts by fromthethicket →
This entry was posted in events in Golden Gate Park. Bookmark the permalink.